14 Reasons Why You Need a Ross Geller in Your Life

14 Reasons Why You Need a Ross Geller in Your Life

Now that you have matured, and by that I mean been kicked out of the undergrad world and shoved into the work-field or graduate school world, you need certain people in your life. Joey was the heartthrob but not a commitment-type man; Chandler was the goof that made everything nice and awkward, and you don’t need extra help doing that; Monica made it okay to let your inner OCD show but let’s not get carried away now; Rachel helped you feel smarter yet profoundly uglier; and Phoebe was just Phoebe. But Ross, he is winner all around. You need a Ross Geller in your life, whether you know it or not. So I’m letting you know now. He’s got everything you need to make life more bearable and just plain entertaining. He was the kid that never grew up, the academically smartest one in the bunch, the one with the biggest heart, and the awkwardly untalented one.

Here’s a few reasons why you NEED Ross…

2. He’s not afraid to show his bromance for the hotties.

Every girl who watched the show or was actually in the show, fell in love with Joey. He’s the ultimate bachelor, so why would Ross be afraid his feelings for him? It takes a real man to not be afraid to cuddle with another man! And look how content he is laying in Joey’s arms. Imagine yourself added to that pile up 😉 You know you will need such a relaxing environment after studying for hours in grad school or working full-time in the adult world. 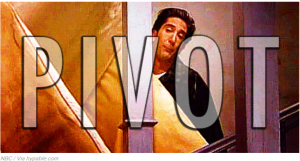 I mean, seriously, who wouldn’t want a guy that can coordinate moving so precisely? His directions are spot on and given all that moving you will be doing into a new apartment or at least out of your old one, you will need someone with his types of skills. New weekends: you could be pivoting with Ross! 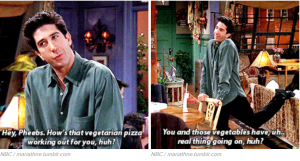 Now with a full-time career or full-load of graduate studies, you are losing your flirting skills. Don’t get too distraught, Ross can teach you the best moves for winning someone over. Look at that awkwardness, who couldn’t fall in love with you after two lines? You know you fell in love with Ross over this one; he even popped his leg like in Princess Diaries. That’s true love.

Forget ninjas, Ross is in the house! He will always pick the right place for dinner, always be able to protect you at night, always know the answers to his own questions, and never forget anything because of his keen sense of unagi. You cannot simply develop this skill easily, but Ross has mastered it. Thus, he’s the perfect boyfriend.

He even creates his own music, unique and never-before-heard. What girl doesn’t desire a musician? He would dedicate a masterpiece just to you. How could you not listen to his sensual melodies? He puts real passion into his work. You will fall head-over-heels for him. Actually, probably quite literally will fall over because of the ratchet sounds coming from that poor, moaning keyboard that wishes itself it was dead.

Who has watched Friends and hasn’t remembered this one simple grammar rule? Seeing these two words written and used incorrectly is worse than nails on a chalk board for you college folk. It’s a simple rule, yet people painstakingly get it incorrect over and over; Ross feels your pain. Really, he is pained in this scene as he impatiently screeches the difference. That’s why he’s the perfect boyfriend: “Oh baby, you had me at the proper use of ‘your’.”

He is a perfect dad. What else could you ask for in a husband and father of your children than a man dressed up in a completely mismatched ensemble such as this? I mean, look at his face. He is so happy to be wearing that impossibly coordinated outfit and you can’t help but smile. Ladies, wondering what a good father will look like? No need to look further than this picture. Just don’t ask where he got all that stuff.

Need a goodnight lullaby? Out of bedtime stories? Wondering what good rhyme there is to help your child sleep? Ross has got your back. He will literally put whatever words pop in his mind into a soothing bedtime lullaby. Plus, it will always rhyme. Never question his parenting. Your kid will grow up to be a champ.

We all need one of those people in our lives. The types that are so smart that they are actually dumb. He knows every bone in every dinosaur but can’t read the label on a condom box. Everyone who watched this show will always remember the statistic that condoms only work “like 97% of the time.” And it’s on the box.

11. He’s a threatening kind of guy who will tell off anyone who upsets him.

It will be a delayed response, but he will take care of those who mess with him. He is super cereal here, guys. You better hope you’re not still around after he passes. Need a man who will stick up for you? Want a guy who will take care of business? You could probably do better than this, then. But hey, you want to scare the shiznit out of people by knowing the right ghost? Keep Ross around for the afterlife so he can really take some people down!

No secrets here. He is as honest as a priest. He has no shame and doesn’t know what to keep to himself. But that’s a reason why you need him in your life. He wouldn’t go long before telling you everything. If you can hold out for, oh say 10 minutes, you will know the life of Ross. Nothing wrong in that, but TMI sometimes buddy. Knowing your failures such as these is not quite something you want to spill to the ladies. (But again, look at that face, priceless puppy face.)

Worried about those kinds of guys that just excrete mass amounts of testosterone with every breath? Well no fears, Ross is not that man…by any means. He is very sensitive and quite possibly scared of heights. Scared for your future now that you have graduated? Ross is just as scared for you. Worried that your future career plans are crumbling? Ross is screaming right there with you. Panicking a little? Ross is panicking a lot for you.

14. He is that sweetheart you always dreamed would look at you in the kindest of ways. 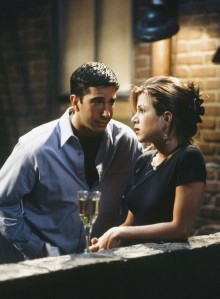 Ross has the most heart out of anyone on Friends and repeatedly proves it. Ever want a man to stare at you with that dreamy, starry gaze? Ross is most definitely your man. You know you need someone like him in your life for those tough days where the worst seems to have happened all at once. His care and love for his friends never failed throughout the entire show.

You need a Ross in your life and here are just a small number of reasons why. He’s a perfect mix of everything and lacks the right things, too. Dream on ladies and pray a Friends reunion shows up some day!!